“You are the temple of the living God! You are building the house of God! God is dwelling in you and thus you are able to build this house of God. The individual responsibility does not cease with the completion of the building, for that is only the beginning. The speaker was the Rev. Robert Y. Johansson, President of the Green Bay District of the Superior Lutheran Conference, at the groundbreaking ceremony. He finished his speech saying, “If you build a physical plant without the spiritual, you have failed in the whole program. I hope in erecting my building, to follow the blueprint of God.” 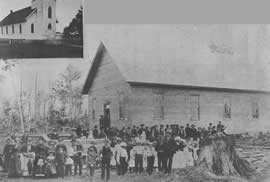 Five years earlier, the Stephenson Lutheran Church Society of the village of Stephenson and surrounding community, met on October 29, 1945, at 8:00 p.m. at their chapel. Their chapel was a former Civilian Corps Camp from Cedar River, which was purchased and moved to the present church site by a crew of men volunteers. It was remodeled for use as a chapel and dedicated on December 2, 1945. Years later, the old chapel was sold to become the American Legion Post. The meeting, a divine service and business meeting, was led by the Rev. J. Melvin Hedin, who became the first pastor of the church.  A church school for the children and evening services had already been conducted for some time by the society. The membership began with 62 charter members and 30 children. During this time the name was changed to St. Stephen’s Evangelical Lutheran Church. 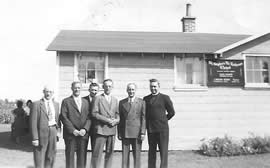 The groundbreaking ceremony took place on June 18, 1950. at 3:00 p.m. A large gathering of parishioners and residents of the village attended. The church grounds had been presented to the congregation by Dr. and Mrs. K. C. Kerwell. Rev. Hedin opened the program with scripture reading and prayer and then turned the first shovel of earth for the new structure.He was followed by the following people, who each turned a shovel of ground: The Rev. Robert Y. Johansson, from the District of the Superior Lutheran Conference; Edmund Sager, from the Church Board; Charles Donaldson, from the Church Building Committee; Mildred Diehm, from the Sunday School; Abeline Stobe, from the Ladies Aid; Nona Sundberg, from the Luther League, Dr. K. C. Kerwell, donor of the land: Herbert Corey, President of the Village Council ; Harry Gjelsteen, Architect; and E. F. Potter, Contractor. 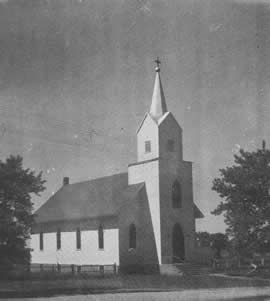 Construction on the new church was started in July 1950. At this time the congregation had grown to 146 communicants and 50 children. Harry J. Gjelsteen, of Menominee, was the architect and E. F. Potter Lumber Company, of Stephenson. was the contractor.The Gothic type structure was erected overlooking the Little Cedar River. It was of brick and cinder block construction and had an oil burning heating unit in the basement. It had a balcony and a full basement which contained a dining and club room and a modern kitchen. It seated 200 persons and was built at a cost of $24,000.00. The cornerstone was laid during appropriate services on September 17, 1950, at 2:30 p.m. It was donated by the Menominee Granite Works. A copper box, containing a Bible, a Catechism and various historical documents, was placed in the stone by the Rev. Hedin. A generous offering was given in celebration by the 250 people who attended this ceremony.

The dedication of the new St. Stephen’s Evangelical Lutheran Church took place on July 15, 1951, at 2:30 p.m. Chancel furnishings, including an altar, pulpit and baptismal font were donated by the Lutheran Church of Waupaca, Wisconsin. New pews had been ordered but didn’t arrive in time for the dedication, so 450 chairs were set up for the occasion and the remainder of the crowd heard the services over a ublic address system from parked cars and seats outside the church. The ceremony began with a procession of visiting clergymen and church board members to the front door of the new church where keys were presented to Edmund Sager, chairman of trustees, by E. F. Potter Jr., the building contractor. Rev. Hedin unlocked the door and the procession continued into the church, followed by the congregation. 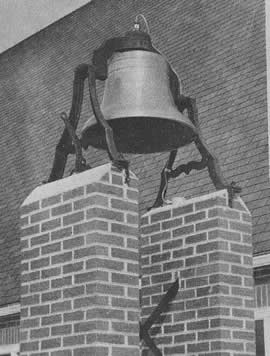 The new church was beautifully, but simply decorated. A dark red drapery at the rear of the altar formed a background. The American flag was displayed to the right of the altar and the church flag to the left. American Beauty roses decorated the altar and an assortment of bouquets, which were gifts from individuals and business establishments, added a colorful touch. The interior walls were decorated in pale green and the windows were plain frosted glass. A new Hammond electric organ was installed for the service and the choir sang the anthem, “God’s House”. This celebration was attended by 650 people. Officiating, was the Rev. T. E. Johnstone , President of Superior Lutheran Conference, from Ironwood. Dr. S. E. Engstom , Executive Director of American Missions of the Augustana Lutheran Church, gave the dedicatory address.

In 1960, the church celebrated it’s 10th anniversary, which was attend by a capacity crowd. The largest communion service in the 10 year history of the congregation took place that day. A talk was given by the Rev. Hedin, who had moved to Wenona, llinois, and returned for the anniversary.He had organized the congregation ten years earlier and he recalled a number of interesting incidents regarding the beginnings of the work. He praised the cooperation and faith of the little group of people who worked with him to get the church started. 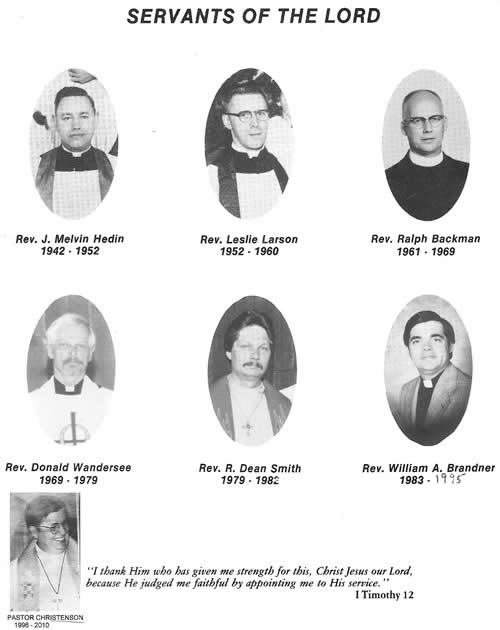 In 1964, on the 14th anniversary of the church, at a Festival of All Saints Day, a Mortgage Burning Ceremony was held. The mortgage was paid nearly two years earlier than the note required. The cancelled note was presented to Walter Stobe, President of the Board. Immediately after the banquet, the congregation assembled in the sanctuary for a service of Thanksgiving, conducted by the Rev. Leslie J. Larsen. Toward the close of the service, the symbolic mortgage burning ceremony took place and the congregation was challenged to look forward to other, as yet unfinished tasks, with thought being given particularly to completing the fine building with the addition of a chancel office and classroom space. The chancel renovation was designed and completed in 1970 by the church members. The bell that once hung in the steeple of the former Bethesday Church in Daggett, was mounted on a bell tower in 1975 and was dedicated on February 22, 1976.

After meeting regularly for about two years, the Church Building Committee began to do a feasaibility study and obtain working drawings of a new building to be added on to the standing structure. Plans included a major fund drive in the congregation which committed over $80,000.00. to the project. Ground was broken on Easter Sunday, April 15,1990. The new street level addition, which includes a fellowship hall, two restrooms, nursery, kitchen, church office, pastor’s office and narthex were completed by the Wickstrom Construction Company, of Stephenson. The architect was Fred Mientz, of Peshtigo, Wisconsin. The sanctuary was designed and remodeled by members of the church. The Rev. William Brandner commended the members for their efforts, saying, “I am really impressed by the dedication of a small group of parishioners, who are responsible for such a great accomplishment.” 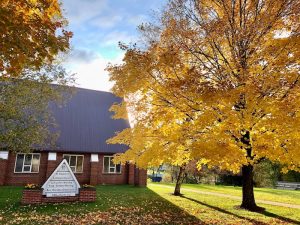 Bishop Dale Skogman officiated at the dedication of the renovated sanctuary and building addition on September 8, 1990. The congregation culminated the dedication day with a cornerstone-laying ceremony and brunch in the fellowship hall. Present at the festivities were Gordon Wickstrom, Contractor, and Fred Mientz, Architect. Also present was the Rev. J. Melvin Hedin, who was pastor of St. Stephen’s when the original church was built. He reflected on the mission of the congregation over the passing years. He emphasized how the renovated building could glorify God and enhance the mission of the church. Hanging over the double doors leading into the sanctuary, hangs a plaque, dedicated to the memory of Dorothy Desjarlais Bogdan. It reads “NO MAN ENTERING A HOUSE IGNORES HIM WHO DWELLS THERE. THIS IS THE HOUSE OF GOD AND HE IS HERE. PRAY THEN TO HIM, WHO LOVES YOU, AND BIDS YOU WELCOME. GIVE THANKS FOR THOSE WHO IN YEARS PAST, BUILT THIS PLACE TO HIS GLORY.”

In researching church files, newspaper clippings, pictures, other memorabilia, and visiting with charter members, I have found this task to be a challenge and an intensely interesting effort. It is my hope that this history of St. Stephen’s Lutheran Church is correct. Should there be any misstatements or omissions. I wish to assure you, they are purely unintentional.
Greta M. Breyer

St. Stephen’s Evangelical Lutheran Church had its origin in its church school. In the spring of 1944, several families who were interested in a Stephenson Sunday School for their children met together to organize. On May 7, 1944, twenty-two children and five teachers met with Pastor Hedin. The work became more and more inspirational. Those pioneer days of the church involved sacrificial giving, enthusiasm, and fellowship. A well-attended Christmas program led to the proposal of a Lutheran Church.