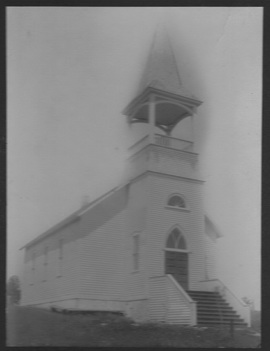 Church was an important part of the life of the Swedish immigrants who settled in the Wallace area. In 1883, nine families and four single men gathered, organized and adopted the constitution of the Augustana Synod and formed the Swedish Lutheran Church Congregation in Wallace, Michigan.

On January 7, 1887, it was decided to build a church on a lot that was obtained from George Smith. The first pastor was shared with a congregation in Peshtigo, Wisconsin. The church was built and the siding was put on two years later. The ground was leveled, a wire fence was built around the church property and left-over lumber was used to build an outhouse and a woodshed. For many years the services were conducted in the Swedish language. But as the children of the pioneers grew up and the pioneers themselves passed away, it was evident that the English language and the American ways would be adopted and the services would be spoken in English. 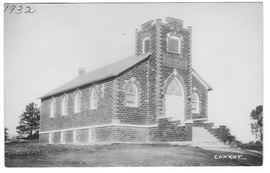 In April of 1931 tragedy struck the Wallace community. A fire destroyed all but three structures in the community…the church was reduced to ashes. There were fifty-one members and twenty-nine children at the time of the fire. Under the direction of Pastor Olson and with insurance money of $3,000 and donations of $1,000 the members of the congregation decided to put their “shoulders to the wheel” and began to build a new church. By October 1931, a church building was erected.

As the congregation of Gethsemane grew, the church could no longer meet our needs. On April 5, 1998 the groundbreaking for a new building was held after worship. On August 1, 1999 the first worship service was held in the new building. Dedication of the new church was held on Sunday, January 16, 2000.

Pastors Who Have Served At Gethsemane